My four nights at the house last week went all too quickly. There is always so much to pack into the time over and above our normal life which doesn’t go away  (i.e. work which I mostly do from home, whichever home I’m at).

On this particular trip I also wanted to visit a couple of vineyards, Chateau la Verriere because the red wine we’d bought in August had all been taken back to the UK leaving us without any stocks in France of their very good red, and Domaine du Grand Mayne because a new release of their fizzy pink (Méthode Champenoise), was now in stock. And our trusty electrician, Stephane, was expected to continue with adding new sockets and generally updating the electrics in the house.

Update on the tree work

First, the tree work. The transformation since my previous visit two weeks earlier was tremendous. Almost all of the trees marked for removal had gone leaving the ground looking rather like the Somme although perhaps not as bad as we might have feared due to the helpfully dry weather which allowed the heavy machinery to move around without causing too much damage. The tree surgeons were still cheery; the job was going well for them and they were enjoying it too. 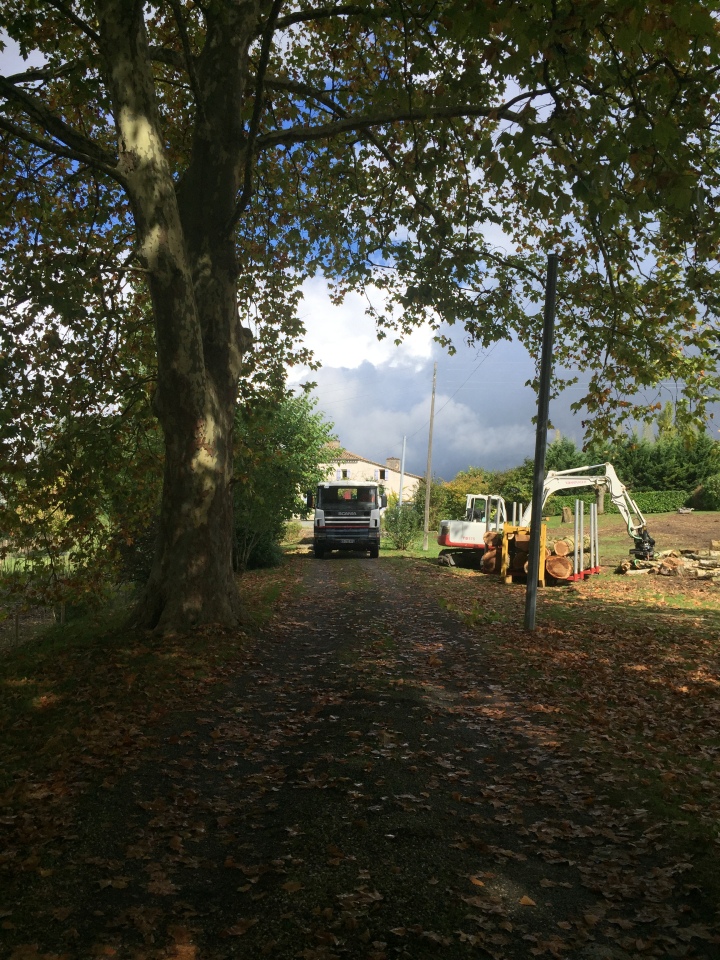 Thank goodness for the heavy machinery. 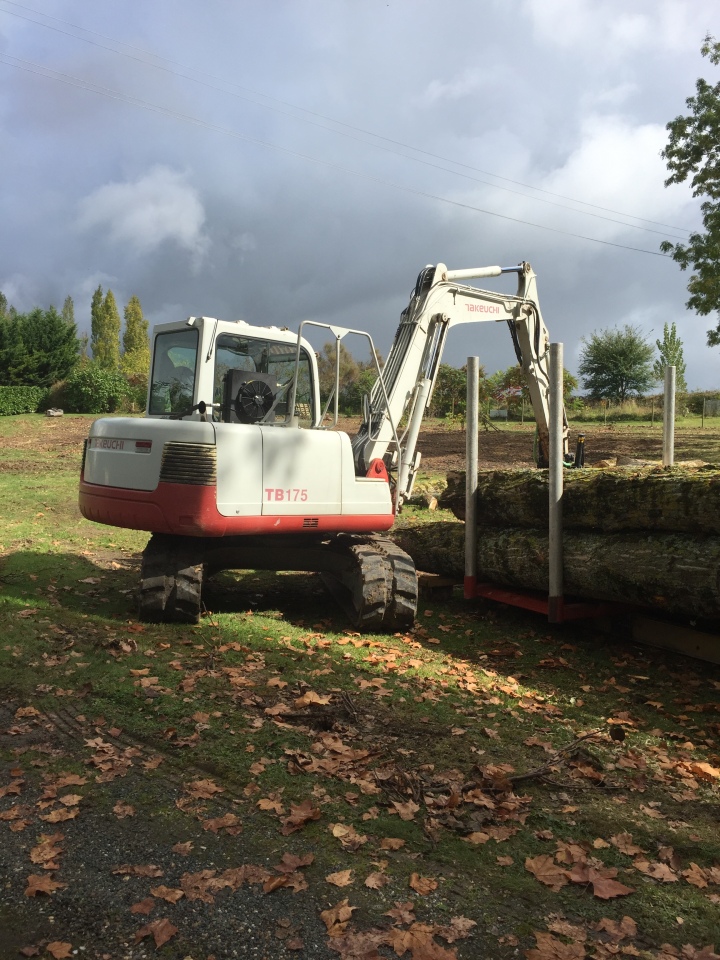 Watching Steve load the trunks was watching a master at work. 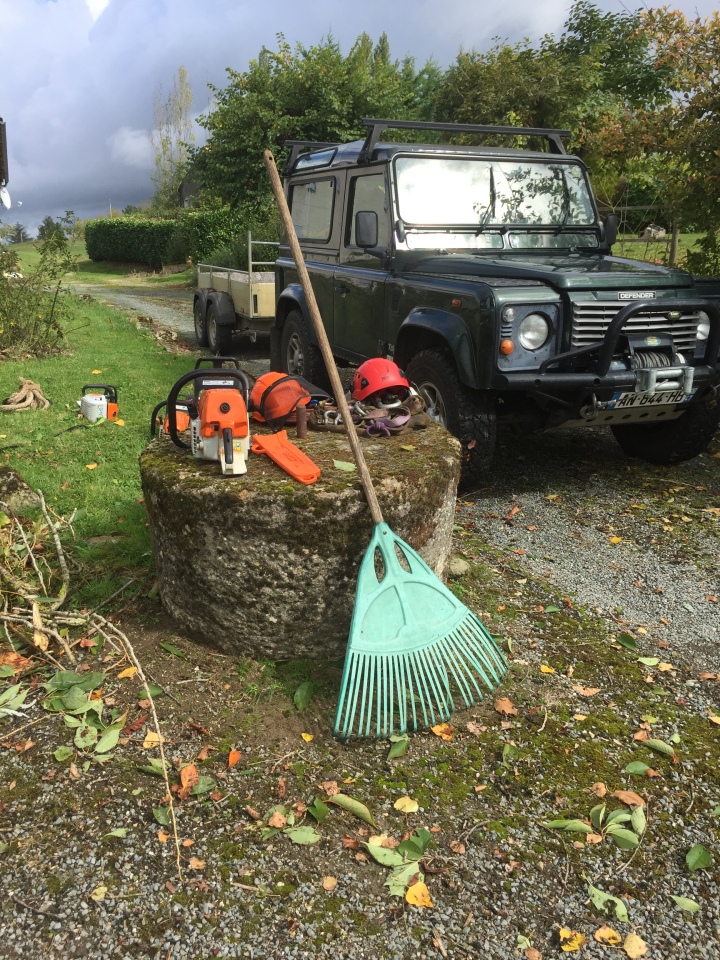 The guys worked in a very methodical and orderly way from the first tree to the last one. 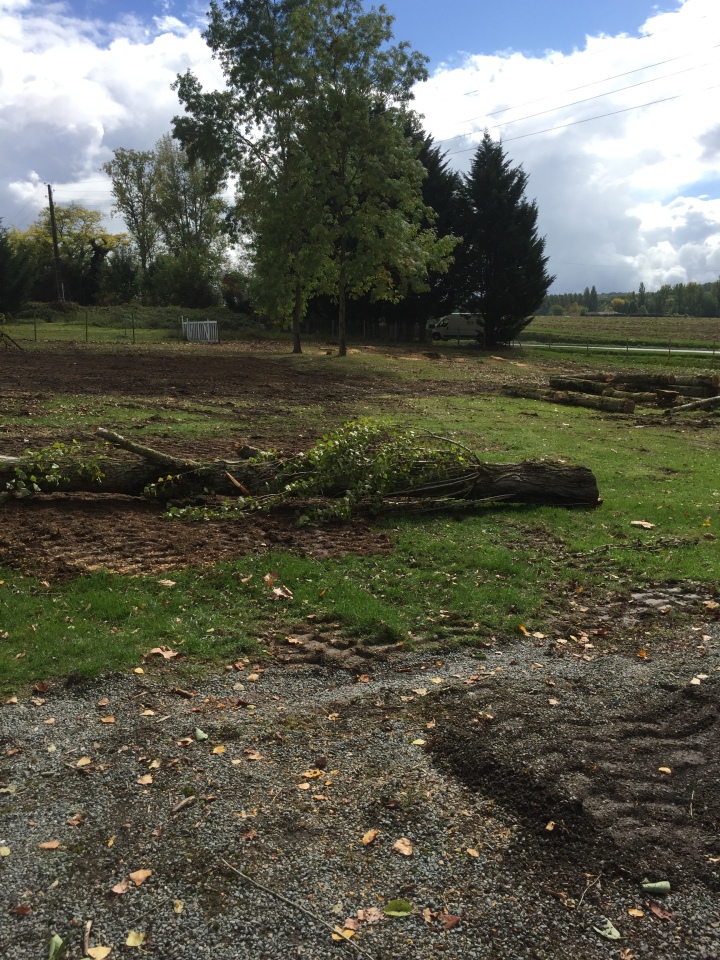 The view at the front has been nicely opened up.

I was surprised at how compact the chain saws were

I was also surprised that access to the penultimate poplar was initially via a ladder! 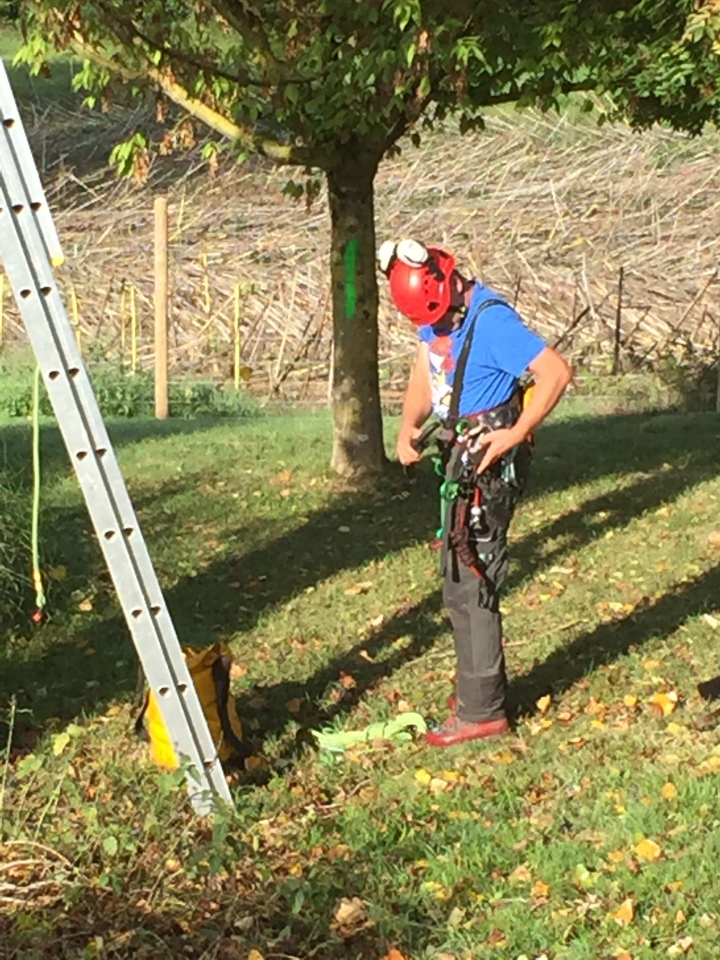 Matt gets roped up ready to climb. This was the only climbing I saw as they hadn’t started climbing on my previous visit, concentrating on dropping the poplars close to the electricity wires.

Another view opened up. This will be the site of a new pond in the dip, surrounded by an exotic style garden (lots of large leaved plants). The overflow from the fosse septique drains through here so it should be fertile! 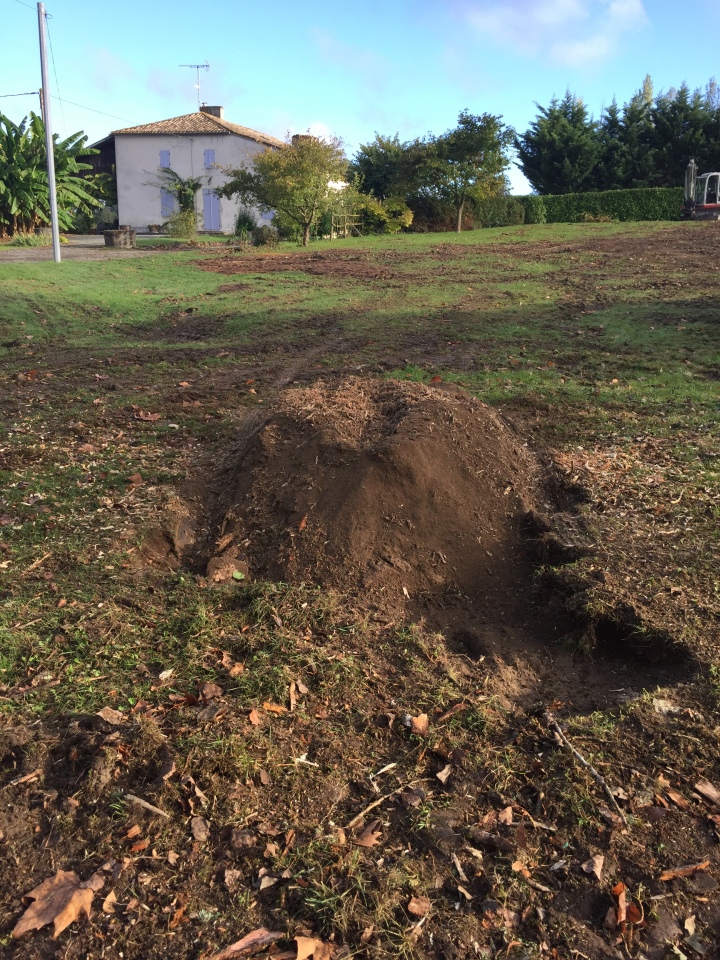 A ground out stump, and the house all closed up ready for my departure.

An annoyingly dark picture! I was slightly late leaving for Bordeaux airport and rushed it instead of checking where the sun was. Ah, well.

And today, as I write this blog update, I understand that the final work (taking a harrow over the Somme-like area of “lawn”) will have been done concluding a mammoth four full weeks of work.

We aren’t worried about the grass growing back. Grass just loves to grow and as we now move to cooler, damper weather it possibly won’t even need re-seeding. My major preoccupation now is to move forward with the overall design of the garden (which hit snags which I won’t go into here) so that we don’t lose any more time in getting some structural planting done. I’m off to a planting masterclass at KLC Design School in London later this week, focusing on trees and shrubs, led by Matthew Childs and Mark Straver (founder of Hortus Loci which I know will help to inform and inspire.

Beating the bounds … and badgers …

When I arrive I usually “walk the perimeter” (beat the bounds?) but I didn’t do this until the following day for some reason. I was disappointed to see that a new access hole had been dug under the fence by what we think are badgers deciding to visit. So I blocked it up with rubble from the garden (mostly debris left from a ramshackle barn which we had demolished at the beginning of last year). Its a rather Heath Robinson (attempt at a) solution but perhaps it will work. Perhaps it won’t … You will see that we have added some chicken wire to the base of the fence to try to keep rabbits out too. 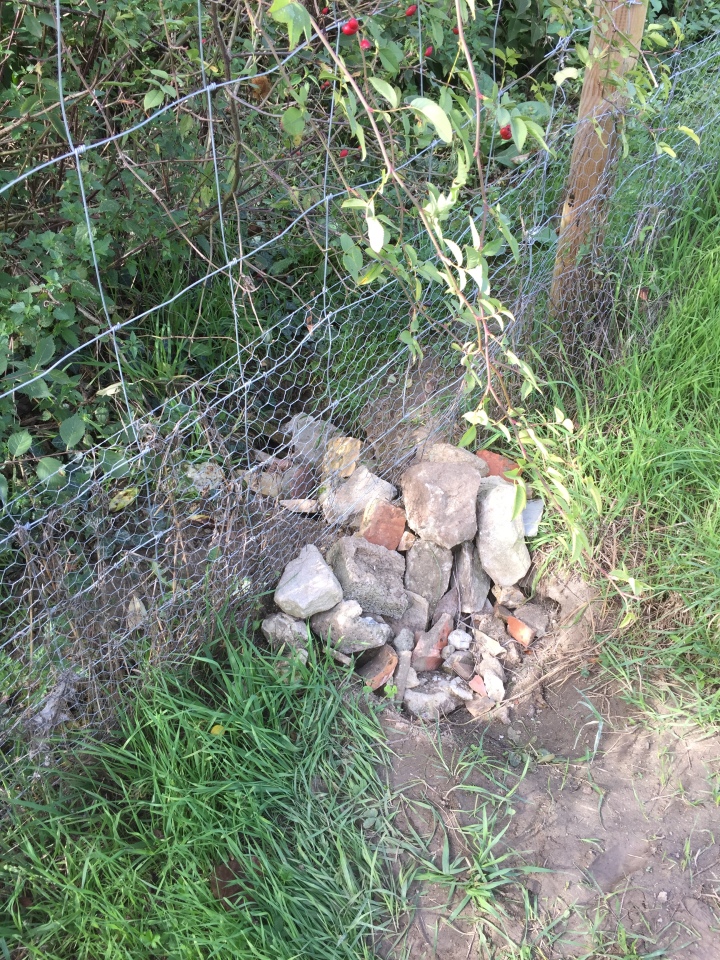 A few people are surprised that we want to keep mammals out of the garden. The reason is that we don’t want them to trash our planting once we start. We are not against wildlife – of COURSE – but they have the whole of France at their disposal on the other side of the fence. They eat tender vegetation and dig holes at random both of which are unwelcome. Are we likely to succeed, or doomed to fail? Time will tell. At least we’ve kept sangliers (wild boar) out so far …

A glorious morning to visit a vineyard

My first vineyard visit was to La Verriere. We were introduced to this wine by some lovely friends, Lawrence and Sally, and have been converts ever since. I had to be at the vineyard at 9 and the sun was shining warmly so it was a glorious drive. I took the opportunity to take a few photos on the way back which somehow summed up the gloriousness of the morning for me. 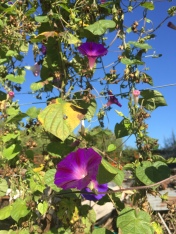 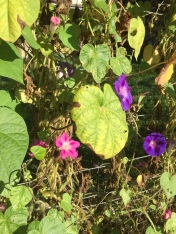 It might be autumn, but there are still some remnants of summer hanging on. 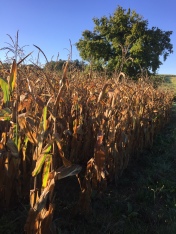 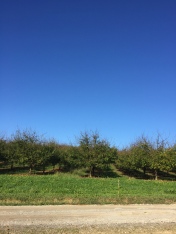 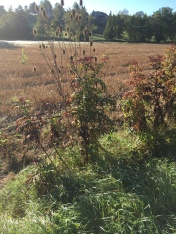 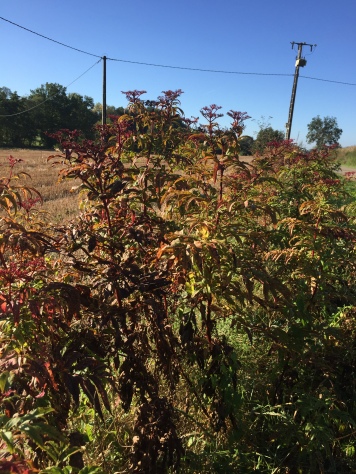 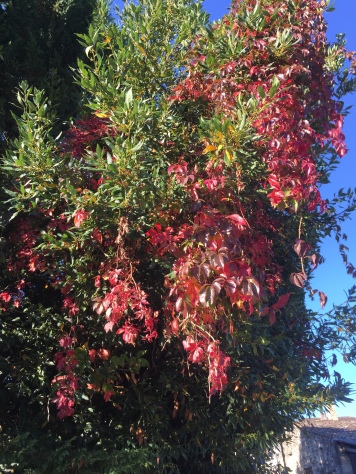 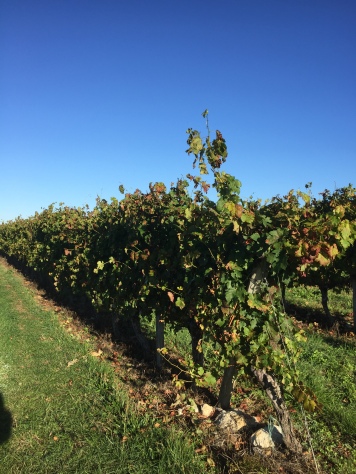 But there are also many signs of autumn to be seen 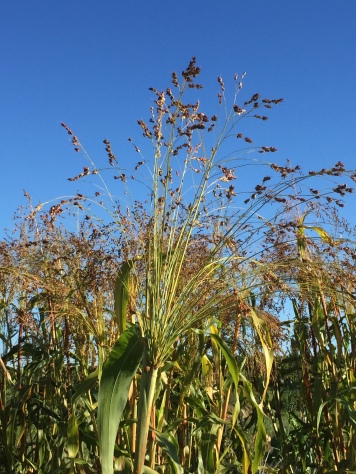 I was very taken by these (what I think are) self-sown maize left from a previous year’s harvest, catching the light beautifully. 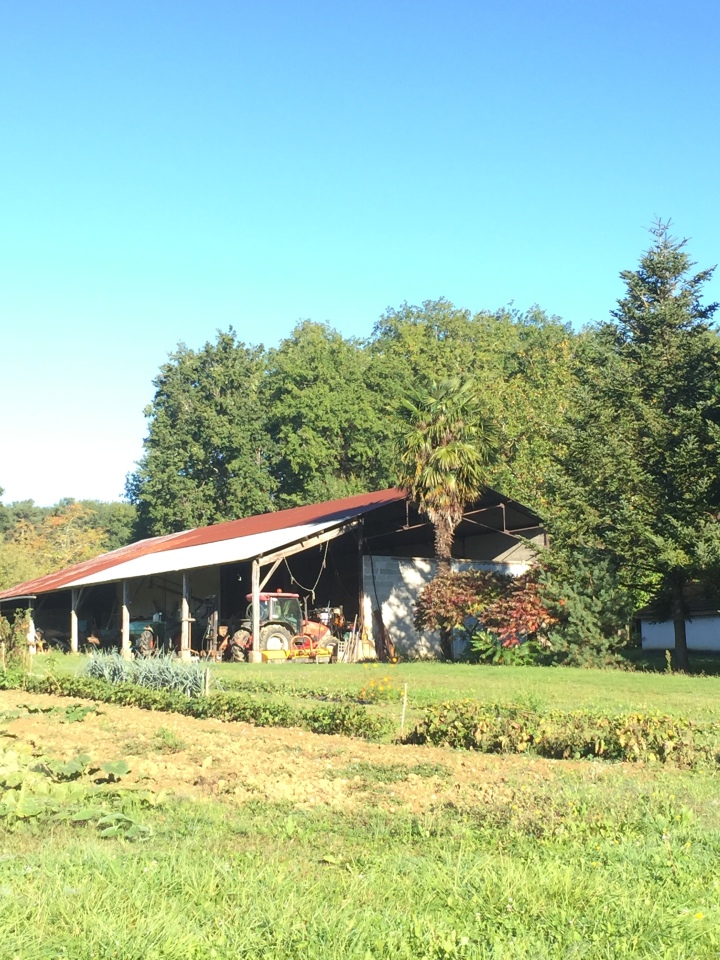 And this open barn is such a typical sight in our part of rural south-west France, although the palm tree is less often to be seen. Rather an interesting juxtaposition I thought.

I kept seeing swathes of this yellow wild flower on roadside verges. I’m not quite sure what it is. Traffic is so light that I was able to keep stopping the car and jumping out to take photos. Only once did someone want to come past and they waited patiently. There is little to hurry about in our part of the world (except for school run time of course!). 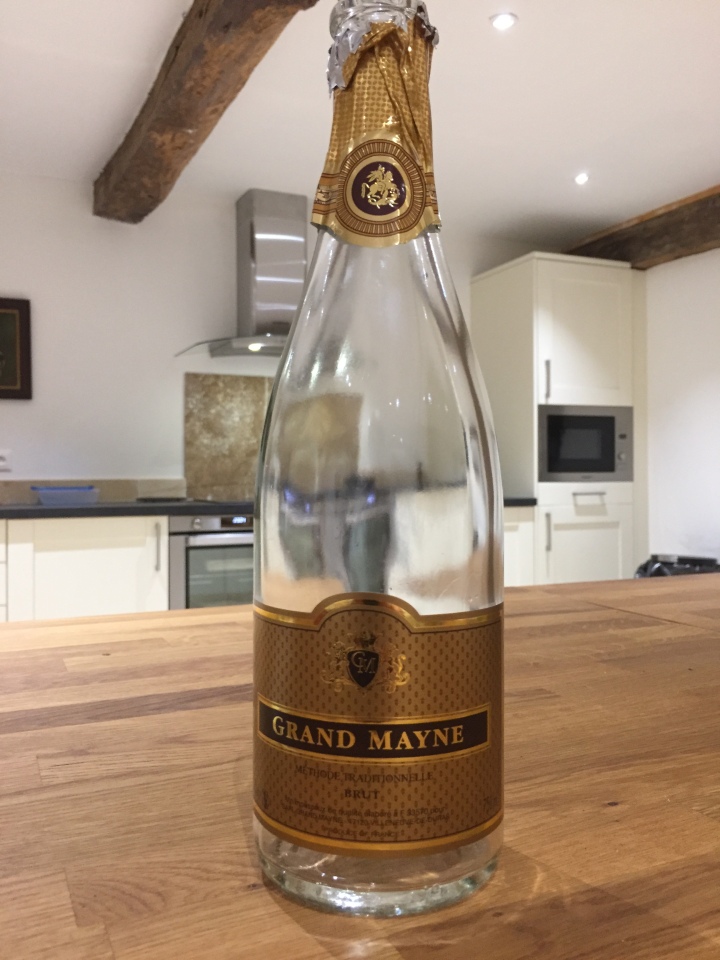 Having subsequently bought several cases of the Grand Mayne fizzy pink I was delighted when our gardening helpers popped round which meant that I could crack open the first bottle and share it with them.

And on another day I had coffee with a friend in the Café de Paris in Eymet, a nearby bastide market town. For some reason I ordered a cappuccino rather than my usual grand café. I won’t be making that mistake again, not being a lover of squirty cream!

Whatever your tipple, cheers! 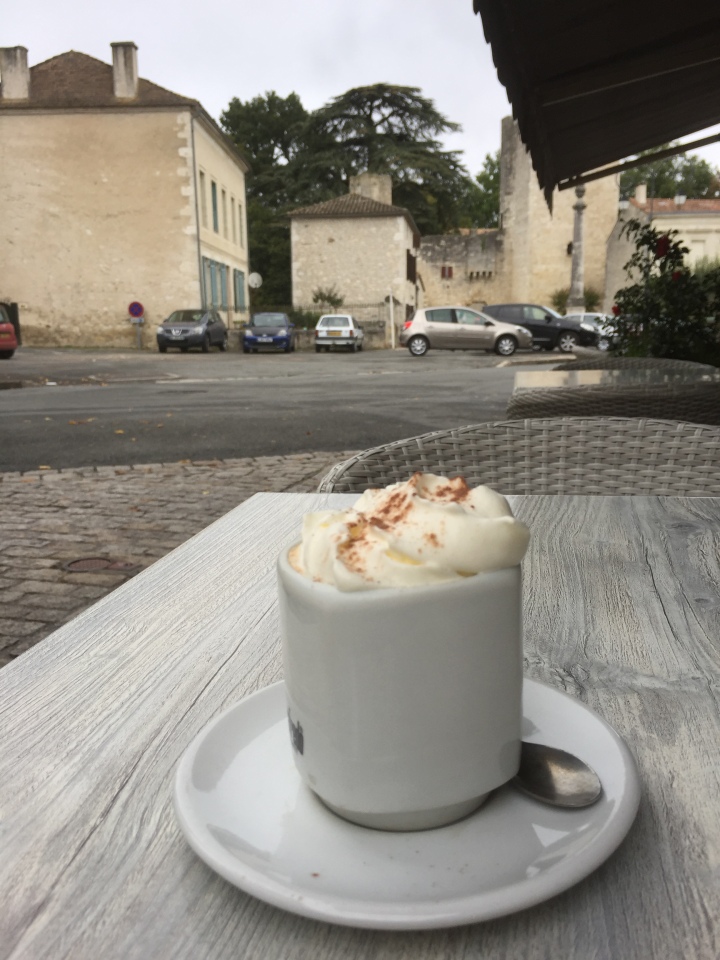 10 thoughts on “The tree work draws to a close, vineyards, badgers, and glorious autumn”

Leave a Reply to The Renaissance Gardener Cancel reply