There is a beautiful sense of counterpoint to our dual lives, each strand differing from, yet complementing, the other. Our lives in West Sussex are lived in a tiny modern house with a garden smaller than most people’s pools in south-west France. So we tend to go out garden visiting (Garden Bothering?) at the weekends when based in Sussex.

Sometimes we will visit an NGS garden, benefiting from the brilliant new app which makes identifying open gardens so easy. Or we might go to one of local National Trust gardens such as Nymans, sometimes meeting up with other members of the family who make the most of their annual membership to enjoy some very low-cost outings. This last weekend we visited Parham House which is just a few miles from us and a real gem.

Parham House, now owned by a Charitable Trust, is in the top 20 of Simon Jenkins’ England’s Thousand Best Houses and its foundation stone was laid in 1577. The gardens consist of beautiful pleasure grounds containing a lake and a labyrinth, and a four-acre walled garden. There are also stunning herbaceous borders, a glasshouse, vegetable garden, orchard and a 1920s Wendy House. 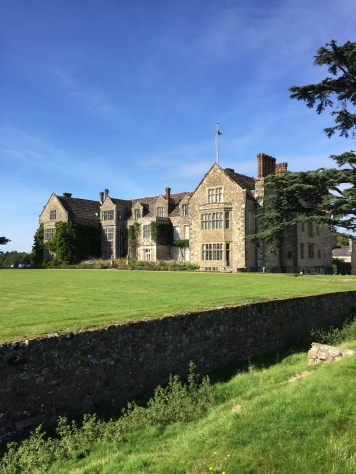 The back of the house, looking towards the church

When we first moved to West Sussex we brought few plants from our previous family house and garden in Surrey, partly because we preferred to leave everything in place for our successors, partly because I was desperately busy with work in the immediate run-up to the actual move, and partly because our new garden is so small. However I did bring two large potted aeoniums which had been kept going from the previous summer, overwintered in our Surrey greenhouse. We enjoyed them all summer on our warm, sheltered, south-facing patio. As autumn approached, with nowhere safe to over-winter them, I realised that we would either watch them die a slow and painful death or I could look for someone who had facilities to look after them who might welcome receiving them as a gift. Via Twitter, I approached Tom Brown, Head Gardener of Parham House, and he expressed gracious delight at the offer. I duly delivered them to a deserted glasshouse in an equally deserted garden during the lunch break on one of their closed days (and slightly naughtily took the opportunity to spend a few minutes whizzing around a deserted and oh, so, beautiful garden). I’ve stayed in touch with Tom on Twitter (the dreaded aeonium lady, I suspect!) and we’ve visited the plants a couple of times to enjoy seeing them in Parham’s wonderful glasshouse. On Saturday I had the opportunity to meet Tom face to face for the first time and we spoke fondly about the aeoniums …

Parham House hold a number of events throughout each year and we were there on Saturday for the Harvest Fair. The weather was absolutely glorious, clear blue skies and warm sunshine. The event was well organised with plenty to see and do and a number of stalls with items for sale. I found myself buying three books that have been on my wish-list for a while, Nick Bailey’s 365 Days of Colour in Your Garden, Georgie Newbery‘s The Flower Farmer’s Year, and Jinny Blom’s The Thoughtful Gardener. We also signed up for a weekly fruit and vegetable box from Riverford Organic Farmers.

Old carts were on display in the Fountain Court

and a collection of old mowers and similar tools could be seen near the house. 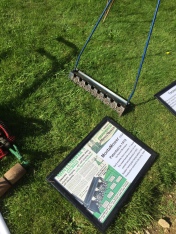 Parham is very dog-friendly, welcoming dogs on leads at all times into the garden. There were plenty visiting on Saturday.

We arrived part-way through Tom Brown and Richard Ramsey of Withypitts Dahlias in conversation about the dahlia trial beds.

Parham House is known for its trial beds, which this year have featured dahlias and zinnias. Huge number of cut flowers are produced for the house, up to 30 buckets each week, Tom said and dahlias and zinnias are obviously ideal for this use. Tom said he is currently obtaining his zinnias from the US in order to get the necessary stem length for use in a vase.

This wonderful display had been created in the main marquee by gardeners and a florist.

And this arrangement at the entrance to the house also caught my eye.

And later we enjoyed listening to Tom talking about highlights of the garden in September/October. He’d kindly listed the plants he talked about. 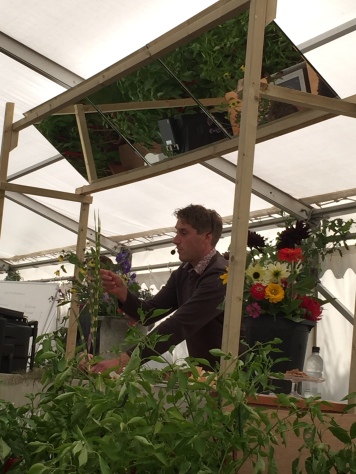 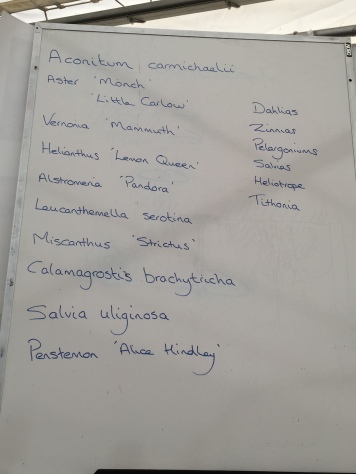 Tom’s particular pride and joy at the moment is the Lagerstroemia indica located in the Fountain Court which has rarely if ever flowered but is doing so this year with joy and abandon.

I didn’t like to mention that we have a small one newly planted in our French garden, courtesy of a friend visiting last summer, already flowering its socks off.

The garden contains some rather fetching nymphs and cherubs 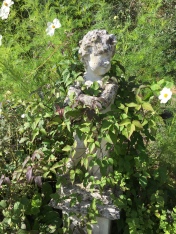 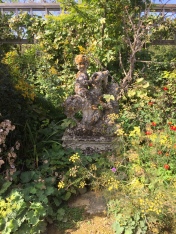 And there are some interesting doors and frames to be seen 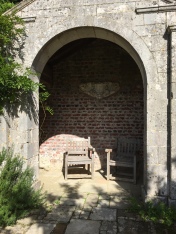 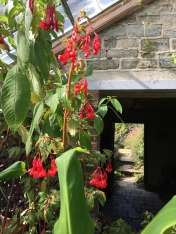 And evidence of irrigation systems from centuries past 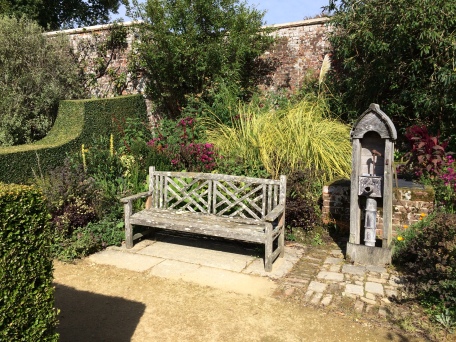 And of course we spent a considerable amount of time walking around the garden where we saw some wonderful planting combinations.

Salvia confertiflora was used in a number of different combinations to great effect. I absolutely love this plant, which I first saw at Great Dixter. I’ve tried to grow it myself without much success but will try again in France.

Many different asters were distributed around the garden, seen here in combination with ammi 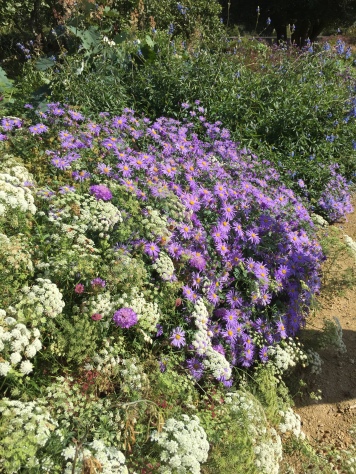 And we were interested to see and hear that Tom doesn’t deadhead as assiduously as some gardeners do, preferring to leave flowers to progress through all their stages and then leave seedheads for winter. Here is an ammi showing all stages of the life cycle of the flower which I was rather taken with. 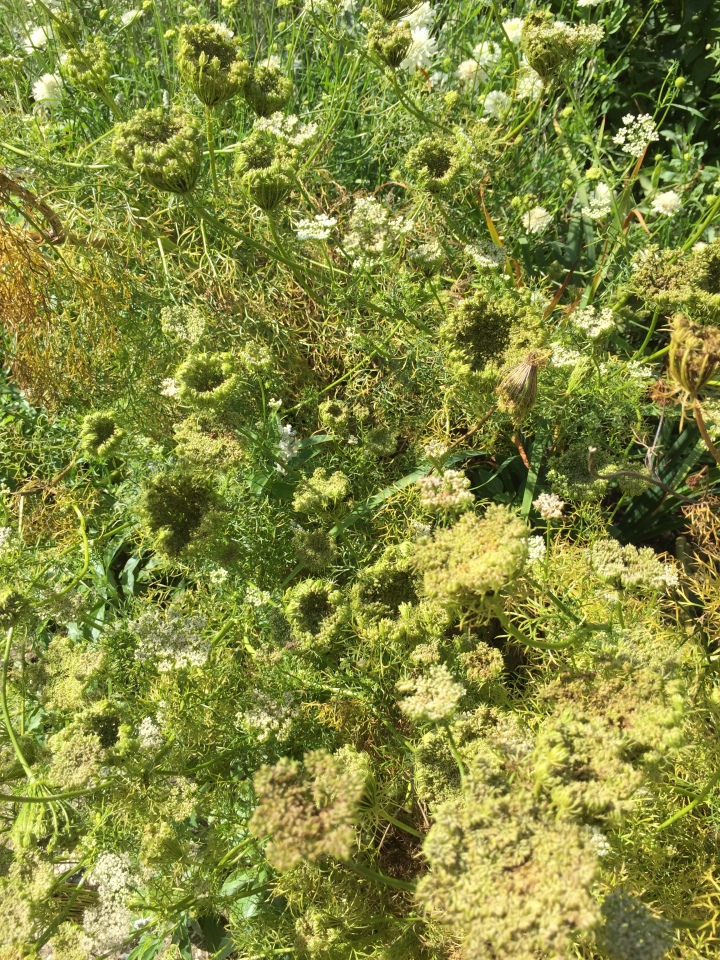 I especially loved these planting combinations 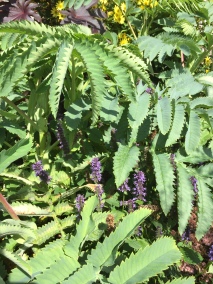 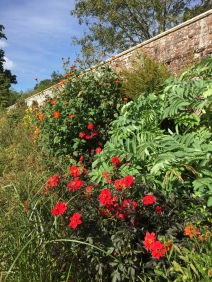 And this plant was rather interesting but we couldn’t remember what it is. Any ideas? We saw just this one example in the garden 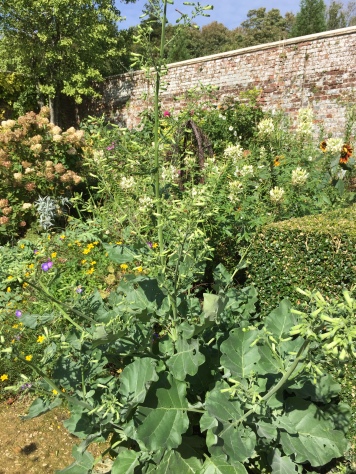 Parham House is in an idyllic situation, surrounded by gentle hills of the South Downs and very peaceful … except that from time to time the urgent noise of acceleration is heard from the light aircraft towing gliders into the air from the nearby gliding club. I just caught a glimpse of a glider soaring over the house. Rather a different hobby from Garden Bothering! 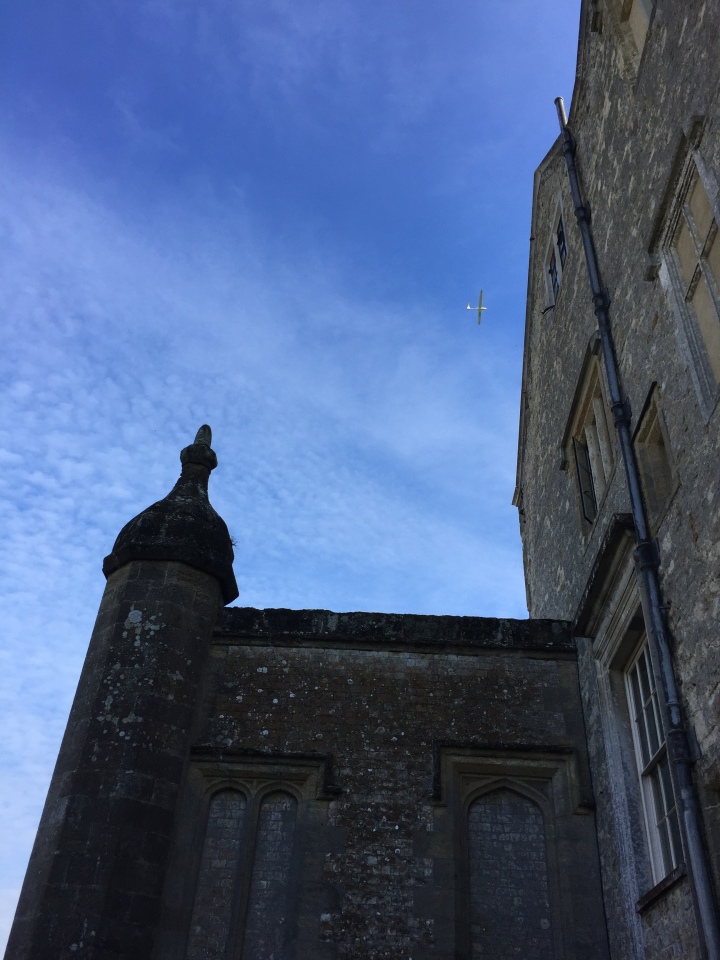