It has been an interesting few weeks in our family. Darling Daughter returned to work after maternity leave. She has a responsible job involving standing up for those who don’t have a voice any other way, and we are proud of her for her commitment to the dispossessed. Returning to work inevitably meant that GrandBoy Number 4 started at nursery. At the end of his first week he arrived home going down with a bug. By the end of that weekend he was sufficiently poorly that these GrandParents were called to action to look after him on Monday. Monday turned into Tuesday and he continued to get worse such that a visit to the GP led to a referral to the Child Assessment Unit (effectively Paediatric A & E) at our local hospital. He continued to go downhill and was admitted. Thankfully a diagnosis was made reasonably quickly and effective treatment followed which enabled him to return home after two nights (apparently a typical stay). Clearly there were a number of previously un-encountered bugs and this GrandMa caught several of them. I came out to France on Monday morning (other GrandParents being on standby just in case) absolutely heavy with cold, flu, bugs … call it what you will. I was sneezing so much that I was prepared for EasyJet to deny boarding. Fortunately they didn’t …

Tempest Zeus was on the rampage however and 160kph winds roared in an easterly direction across France from the Atlantic. My plane flew right through the storm. The flight was probably the bumpiest I have ever experienced and even the cabin crew, usually fairly poker-faced, were clearly relieved when we landed safely. I usually choose to sit at the front so was in a good position to observe.

So far, in our ownership of the house, we have always flown to France and hired a car on arrival. We usually fly from Gatwick to Bordeaux (BA or Easyjet who we prefer) although have occasionally used the Flybe Southampton to Bergerac route which we like but which never seems to be at the right times or on the right days for us. We have used several different car hire companies. Some were absolutely fine. One or two are so awful that we’ve blacklisted them. Sometimes we book through Holiday Autos, but often we click straight through to EuropCar from the EasyJet site when we book our flights. I’m quite relaxed about what car I’m allocated. I don’t mind whether its manual or automatic, smart or not. A benefit to using hire cars is the opportunity to choose a vehicle which suits your needs on that particular trip. So in our long summer visit last year we had three different cars, ranging from a small hatchback to a large Renault Espace (gorgeous car ideal to transport GrandBoys). We have also hired a minibus, and a van at other times. This time I was given a Dacia Duster … hmm … a bit basic but it goes from A to B and that’s all I need. 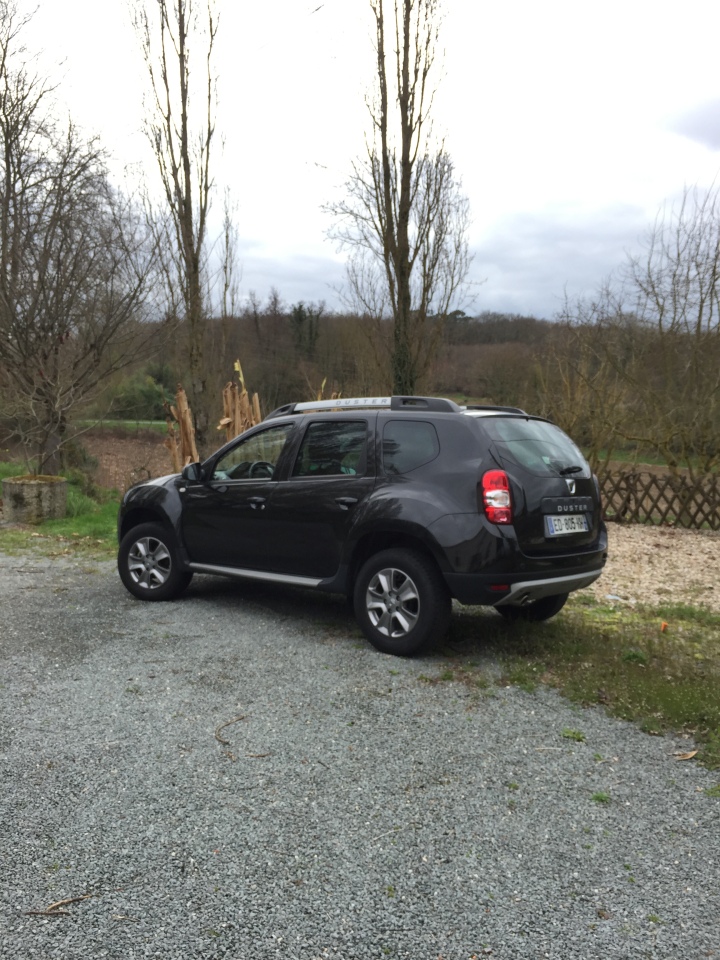 On Monday my drive to the house from Bordeaux airport was as straightforward as usual despite the high winds. It is now becoming a very familiar route but nevertheless I took extra care because of the extreme conditions. I turned left into the drive on arrival, stopped to open the gates, and looked to my right. A large poplar had been blown down by the storm. It had fallen towards the road but fortunately wasn’t long enough to extend beyond the ditch. It had damaged a couple of sections of our fence and, I later discovered, brought down a telephone wire. This is the first time we’ve experienced a tree down, but it is a common occurrence in rural France.

This reinforced our decision to prioritise the work on the trees. We have a number of poplars, planted decades ago as a crop, now long past their best. They are brittle and snap easily. Some are taller than, and encroaching on, the main electricity cables. So they need to come down. The tree surgeon and his associates are currently waiting on the electricity company for a meeting to discuss safety given the proximity of electrical cables.

There were two purposes to my visit. Firstly, this was “The March Visit” (in keeping with our desire to visit every calendar month. Secondly I wanted to run the mower over the grass, strim some key areas, and take weedkiller around all the boundaries. I realise some readers will be offended by my use of the “W” word. I will return to the topic in a future blog post as the issue is very far from black and white.

I’m in a busy work period so (as always) I have my laptop with me and have spent significant periods of time working (constantly being thankful that living in the internet age enables us to have this adventure in the first place). But I can adjust my working day to give me time outside to do garden work.

HOWEVER … firstly I have this dreadfully heavy cold and have felt awful. Secondly the weather has kept me inside. The wind was so strong on my arrival day that it would have been dangerous to try and work outside. And yesterday it rained heavily all day. So I’ve done little or none of what I came out to do. .

So, my plan to dash out here, do a bit of essential garden maintenance, and then dash back has been well and truly thwarted. Such is life divided between two homes and I’m reminded that I need to find someone to help me in the garden. A number of good gardeners operate in this region but they tend to take full responsibility for a property, strimming and mowing everything to within an inch of its life. And that’s not what I want. I want to find someone who will be a real right-hand person, who will understand that I’m head gardener and will be happy to operate alongside me under my guidance, doing the jobs that I just don’t have the time to do, but doing them in the same way that I would if I did have the time.

As I write this, in our little office in the centre of the house, I have been listening to the sounds of some critter or other rushing around the ceiling cavity above me. It is slightly disconcerting to be honest. But maybe they and their forebears have been here longer than us. I shall break for dinner in a moment (yellow chicken casseroled with local red wine). And then I shall sort myself out for the early start tomorrow for Bordeaux and return to the UK. The French Air Traffic Controllers have been messing around this week and a number of flights have been cancelled. I haven’t heard anything from EasyJet so am hoping mine isn’t one of them. I do need to be back in the UK tomorrow.

Almost every visit that I’ve made to the French house has included two recurring elements: collecting or taking delivery of new furniture (often bought via a Facebook group), and meeting with contractors. This visit has been no exception. I had bought another double bed which will go in the bedroom we have named Poppy (to add to the existing two baby cots and single bed). The previous owners kindly brought it over. And I’ve met with J the menuisier and M the macon, both of whom are involved with ongoing works. J has a few more shutters to instal, and is going to make a door to separate the office from the kitchen. Currently this opening is closed off by a VERY temporary solution installed as an emergency ready for last summer’s guests. M will be fixing the west face of the house, under the covered terrace, which is currently rather scruffy and possibly unstable.

When we embarked on this adventure did we fully realise that it would become a major hobby? Perhaps not, but we are nevertheless thoroughly enjoying the process.

Here are some photos that I took this afternoon on a quick walk around. They really do show the current situation warts and all! Here’s hoping that every blog post from now on doesn’t necessarily follow the same theme! 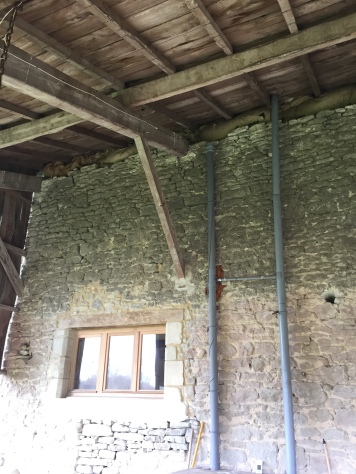 The west face of the house, under the covered terrace, to be renovated by the macon 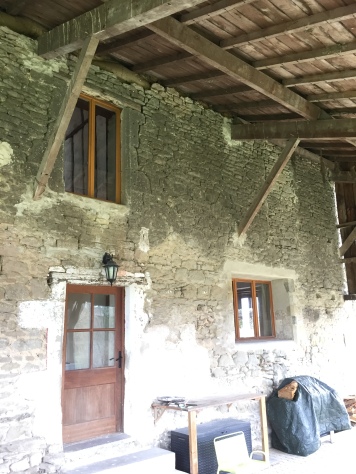 The west face of the house, under the covered terrace, to be renovated by the macon

The west face of the house, under the covered terrace, to be renovated by the macon and shutters to be added by the menuisier.

The first of the poplars to finally come to the end of its life, this one as a result of Monday’s storm. Many more will be at the hands of the tree surgeon.

Poplars do have pretty flowers. One doesn’t normally get the opportunity to see them at close quarters. 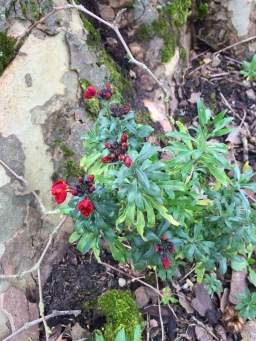 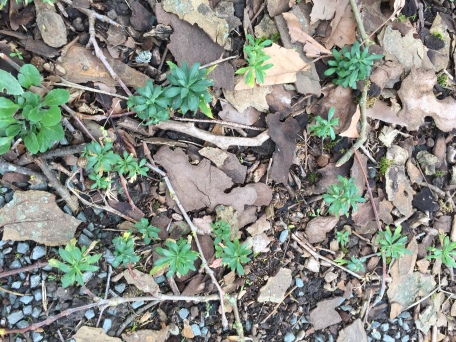 At the entrance to the property several old wallflowers are seeding themselves around. They are very welcome. 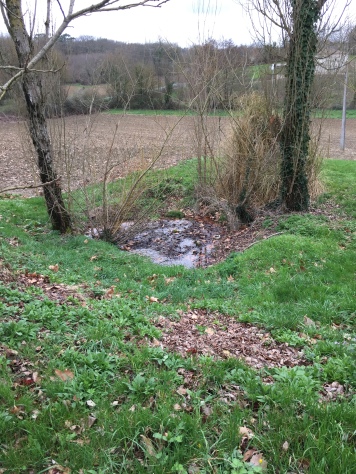 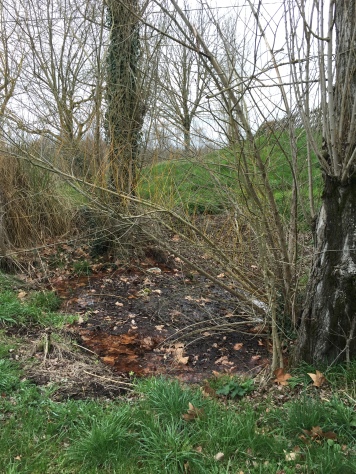 This damp area, lying lower than the house, loosely described for the time being as “The Pond” is likely to become an exotic/tropical style area. I have always wanted to grow gunnera and this seems like the perfect spot. For the moment it is a complete mess!

Arum Italicum grows absolutely everywhere. In due course we will need to be very selective about where we allow it to remain.

I hope you’ve enjoyed reading this snapshot of a flying visit not without its difficulties.

7 thoughts on “Visiting the house in March, continuing the theme of our life, warts and all”

Leave a Reply to The Renaissance Gardener Cancel reply