We have inherited a number of trees at Les Vinsonneaux. The estate agent poetically spoke of “driving up through your own parkland” … but that is rather grandiose language to describe what we have which is actually a real mish-mash. There may have been reasons why trees were planted in their positions; but I suspect there was little rationale. They are what they are where they are because of acts of random history. Many of the trees are now in need of considerable work, so this seems an appropriate time to record what we have and where we are in our thinking about their future management. This blog post deals with some of what I will call the big beasts.

Five large plane trees stand guard and mark the entrance to the property. When gates were installed attention had to be paid to their position to ensure sufficient space for vehicles to turn and enter the drive. Digger Dave says they are likely to date from Napoleonic times. Certainly they have been there a very long time and our tree surgeon pointed out that they have grown to form a single crown. High within that crown is a large nest which we thought last year was occupied by buzzards (of which there are many to be seen circling overhead) but this year opinion has changed to kestrels. Might kestrels take over a nest previously occupied by buzzards?

Last spring, the leaves began to wilt and look sorry for themselves shortly after they opened. Internet research indicated that this might be ‘plane wilt’ although our predecessors said “it happens every year”; certainly new leaves grew and the trees seemed healthy for the remainder of the year. We are waiting for our tree surgeon to observe this wilting, if it happens this year, and advise. Of course, the trees are so majestic that we will do what we can to retain them, but safety must always be a high priority and they are close to the lane. If they are infected with plane wilt we are told their life is limited, possibly only ten years from symptoms first becoming apparent. Many hundreds of plane trees are currently being felled along the Canal du Midi for this reason. We hope it will not turn out to be plane wilt as they frame the entrance so well and provide a tangible link to foregone generations. Here’s an article on the BBC website about the problem

A rather charming story tells that French farmers would always plant a stand of poplars to celebrate the birth of a daughter (see this blog post). Once the daughter and the poplars had matured the latter would be felled to produce income for a dowry for the former. The poplars would not be expected to stand for much longer than 20 years or so and indeed some local friends have recently harvested poplars at 15-years old. Ours are very much older than 15-20 years, probably at least three times that age. They are now very tall and long past their best with dying branches which look unsightly and shed dangerously on whoever or whatever is below.

One poplar blew down completely in the March storms (taking out a neighbour’s telephone wire), and others are very close to the main electricity cables. Something Has To Be Done. They will not be missed as they sucker and self-seed all over the place, and were never an ornamental garden tree, always intended to be a crop, but it won’t be an easy task to remove them.

We have begun working with a tree surgeon and his associates who have heavy lifting equipment and are now waiting for a devis (estimate) to remove unnecessary or dangerous trees and manage others that we want to keep but which need attention. They have visited a couple of times, and we’ve also had a visit from EDF to review the electricity cables which are compromised. I am hoping that we don’t have to wait much longer for the prices so we know the extent of the works that are possible. There isn’t likely to be much value in the wood that’s taken down, because of its age, but some resale value might help to mitigate costs. We will have considerable need of wood chippings for mulching and low-cost paths, so expect to retain some of the material on site. The tree surgeon asked me how much I’d like, “a couple of cubic metres, five cubic metres?” and looked a little surprised when I responded “a hundred cubic metres?”.

Two large weeping willows occupy a key area of the garden relatively close to the house, creating a distinctive look and offering useful dappled shade in summer. However there is no design rationale to their position as they are far from water so the jury is out as to whether they stay or go. At some point they have been pollarded but that was a long time ago and they have grown in a quite random and uncontrolled way since. They too shed considerable quantities of dead wood that has to be cleared before the grass underneath can be mown, and which also trails in an ugly way before it drops. The tree surgeon suggested they could be re-pollarded; the landscape architect suggested they should go. Decisions will be made in due course. 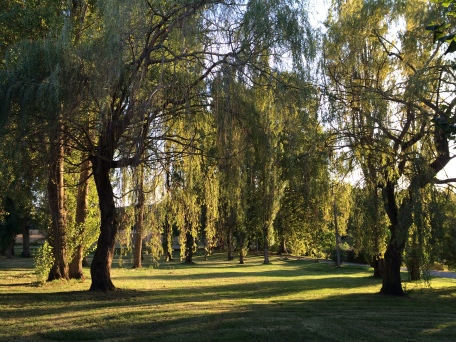 A large, old common lime tree was severely pollarded about ten years ago and now looks a little like a giant shaving brush. It also suckers extensively around the base of the trunk. Furthermore it is in a key part of the area which will be allocated to a new parking area in the master plan, so a long-term future it does not have. There are plenty of other examples in the gardens, villages and towns around us so the loss of this tree will not be felt adversely.

The planes and the poplars particularly produced gazillions of leaves as last autumn progressed, and a hugely pressing problem was what on earth to do with them. The garden is too large and the leaves too numerous to gather them together for leaf mould (at least with the resources we had at our disposal in our first year). We discovered that one way local people deal with heavy leaf cover is to mow over the area, with the mower set to its mulch setting, to pulverise the fallen leaves, and then leave that mulch to rot down across the winter. I did collect some leaves, and put them on to the compost heaps, but generally we adopted this mulching method. Several times over the same area, at right-angles to the last pass, and one could hardly see that any leaves had ever been there. It might not be the ideal solution, but larger gardens demand new and fundamentally pragmatic solutions. I don’t rule out collecting a larger proportion of leaves for leaf mould in the future.

Trees on the skyline

We are able to enjoy many trees far outside our own property, on the skyline particularly on the west side of the property. We experience some amazing sunsets and these trees assume a starring role on these occasions.

Next time I shall write about the fruit, nut, and ornamental trees we have inherited

3 thoughts on “Trees at Les Vinsonneux (1) – the big beasts”