A blissful midsummer’s weekend celebrating the best in garden writing

I can’t remember when I first heard about the Garden Museum.  I’ve been to a few of their wonderful events over the years, have supported Christopher Woodward’s sterling fund-raising efforts for development, and have become rather fond of the organisation and everything it stands for. One day, when I was clearly in the mood to treat myself, I received an invitation to become a Lifetime Friend and my cheque was in the post by return. I was well and truly on board.

I noticed reports of the first Literary Festival, held at the home of Tom and Sue Stuart-Smith (Tom Stuart-Smith being a legendary garden designer) and it was with a little trepidation that we signed up for the second Garden Museum Literary Festival the following year, not knowing quite what to expect and hoping we wouldn’t feel out of place. It was a wondrous event, in the magnificent surroundings of the private gardens at Petworth House, well organised, under warm sunshine, and attended by interesting people who were also warm  and friendly. We immediately fell in love with the concept and decided this would be an event that we would always prioritise. In October 2016 the Festival was held at  Hatfield House  just after they had closed to the public for the year so we had the place to ourselves. In 2017 we went to Boughton House  in Northamptonshire and although we missed 2018 (at the Museum itself in London, the date was announced too late for our diaries to include it) we were determined that we would do everything we could to be present in 2019.

The venue was the magnificent Houghton Hall in north Norfolk, the home of the Marquess and Marchioness of Cholmondeley, our gracious hosts. 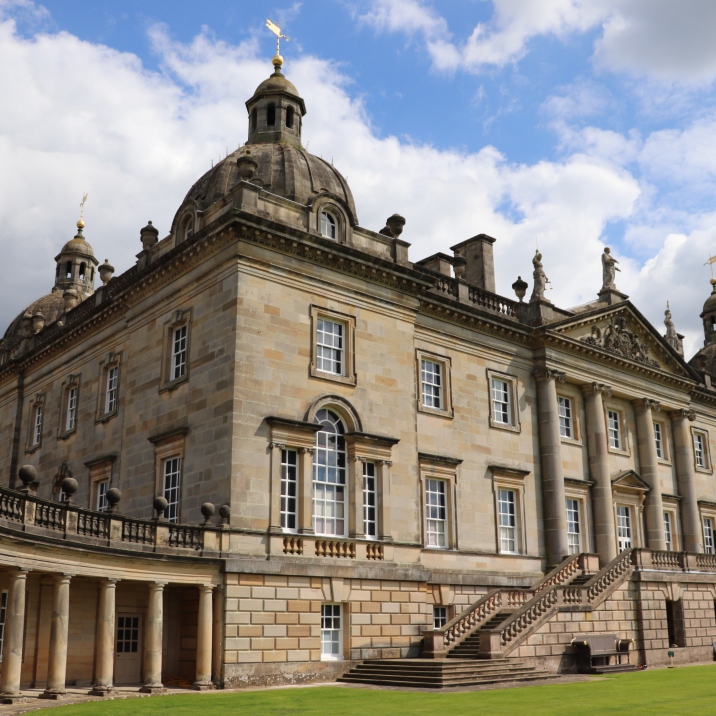 We decided to make a long weekend of it and booked a lovely room at The Hoste in Burnham Market, a hotel I’ve often read about and was delighted to have an opportunity to try out. All this was organised as soon as the date was announced and we’ve been looking forward to it for months.

Several hundred Literary Festivals are held in the UK, apparently, so what is it about the Garden Museum Literary Festival that makes it so special? It is one of the few, or perhaps the only one, that travels to a different venue each year. Numbers are limited (I think to a maximum of 200-250 people per day). And everyone books for an entire day, or for both days; its not possible to just attend one talk. So there are no crowds milling around, just a real sense of being amongst a favoured and chosen few like-minded people at a very special private event. We’ve met some  lovely people and enjoyed many great conversations. Everyone who’s there has one major topic in common: gardens, plants, gardening (and probably a love of culture too). So its a very civilised event indeed. We love it.

There are always at least two talks on at any given time, sometimes three, so there is always a sense of frustration that one can’t be in more than one place at a time. You have to turn down the opportunity to go to something wonderful, in favour of something even more wonderful. Tough choices!

This is what we did on Friday:

Arne Maynard : Gardens to be Gardened
As inspirational as always, Arne’s warmth and generosity shines through as he speaks. I was privileged to spend a day with him and a few others at his home in Monmouthshire three years ago, and it was great to be reminded of his approach.

Tim Richardson: Sculpture in the Garden and George Carter: Objects in the Garden
Two speakers with differing styles and approaches in this session but both informative, thought-provoking and entertaining.

A tour of the Walled Garden with Dimitrisz Sopisz, the new Head Gardener at Houghton Hall

A showing of the film Five Seasons : The Gardens of Piet Oudolf
This session was put on at the last minute in place of a previously advertised talk for which the speaker was unable to attend. We were thrilled because I’d tried to find a location to see the film but there had been nowhere within striking distance of us. So this was a huge bonus.

Peter Parker : Latin in the Garden
Peter started off his talk in the Marquee (there is always a marquee or two at the Festival!) and we soon went out into the Walled Garden for most of it. Some rather nifty earpieces were provided for this (and also for the Head Gardener tours) so it was easy to hear the speaker very well even in the great outdoors. This thoughtful touch was appreciated by many of us.

Lunch for some of us was a delicious pre-booked buffet in the Old Kitchen. Other Festival-goers picnicked outside in the grounds in the glorious sunshine that pervaded throughout the Festival.

On Saturday we started off with:

Then Luciano Giubbilei : Sulptures and Inspiration from Art. After Luciano sat down my husband turned to me and said “the man’s an artist”. We were enthralled by all he showed us and shared with us and bowled over by pictures of the recent project photographed on the home page of his website.

A house tour followed. Wow, what a place! As a break from words here’s some interior photos: 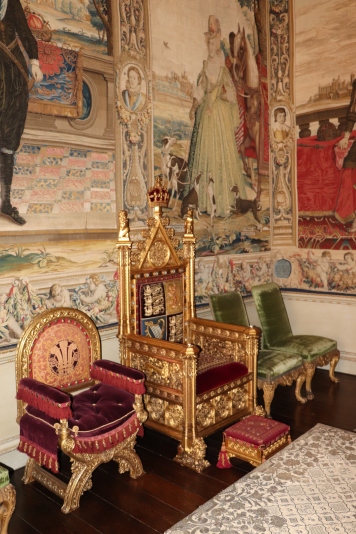 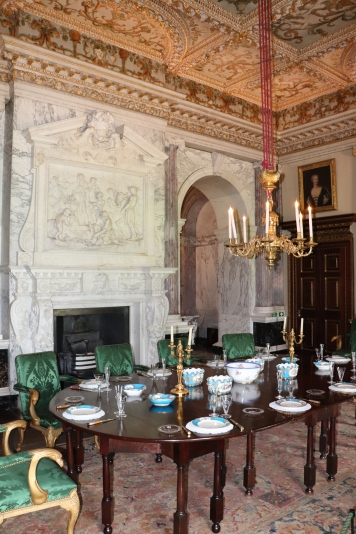 And finally, we heard Shane Connolly  talk on Rediscovering the Meaning of Flowers.

A final “everyone getting together” occasion on the West Front Steps of the Hall saw Christopher Woodward thank our hosts for their generous hospitality, and our hosts thank the Festival for coming!

We then walked around some of the wonderful landscaped park in front of the Hall, looking at some of the Henry Moore sculptures which are currently on display, and finally left this most magical of events in such wonderful surroundings to return to our hotel.

Here’s a few of the sculptures in the grounds 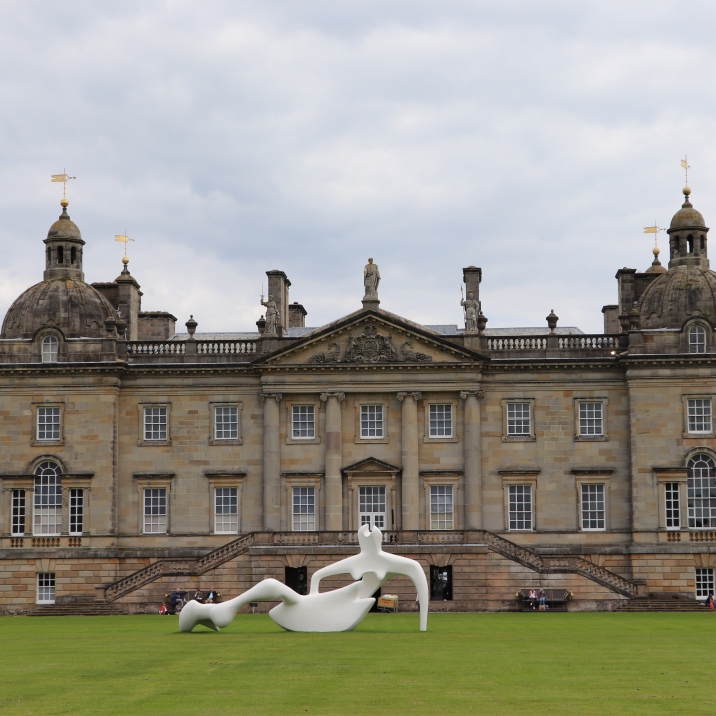 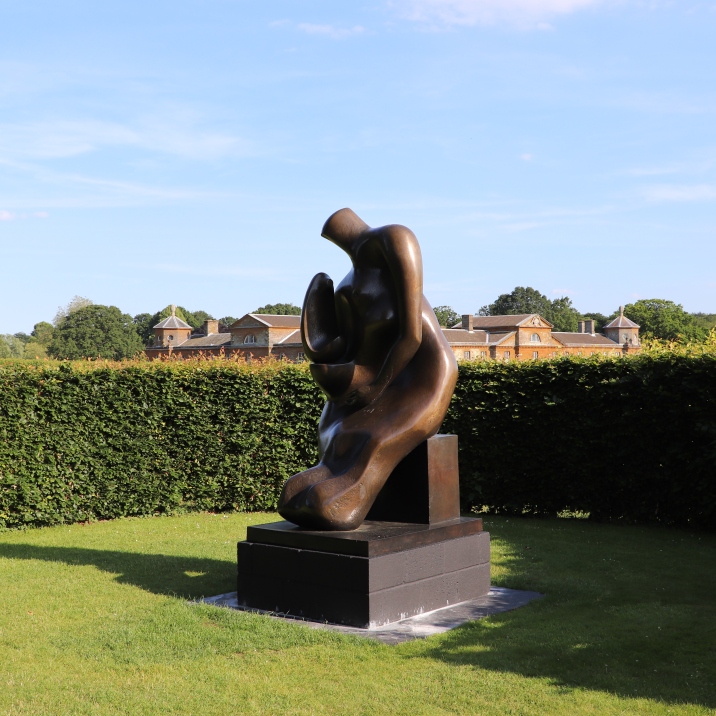 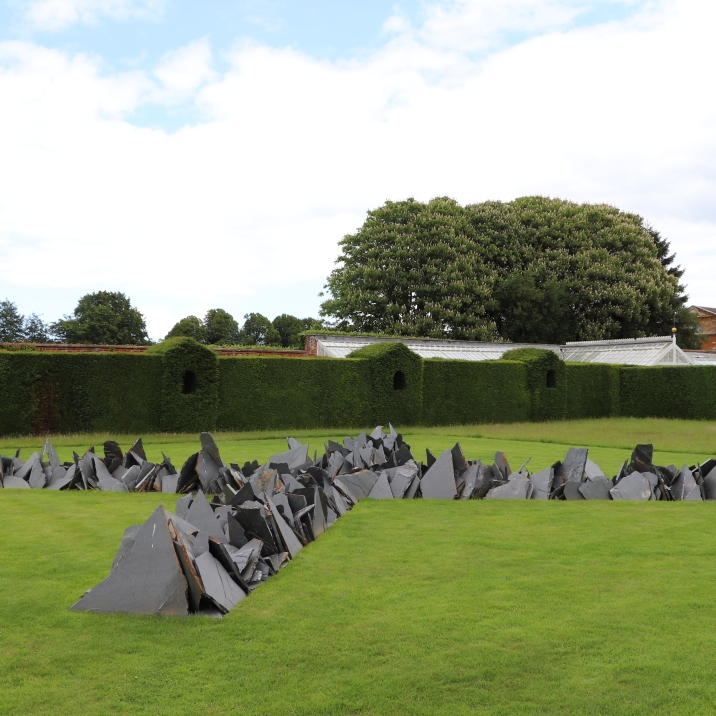 I cannot recommend the Garden Museum Literary Festival highly enough. Our one plea is that the date is announced as early as possible (preferably at least six months ahead) as many people who want to take part have very complicated diaries. If you want to attend book as soon as you can; the 2019 Festival was sold out.

During our long weekend we also visited East Ruston Old Vicarage, and Pensthorpe Nature Reserve, and I will write about these in Parts 2 and 3, as well as show you some photos of the Walled Garden at Houghton Hall in Part 4 of a Long Weekend in Norfolk.