The first time I visited Great Dixter was the first occasion I was introduced to the concept of exotic/tropical style planting. It must have been not many years after the late Christopher Lloyd and his head-gardener Fergus Garrett (recently awarded the RHS’s prestigious Victoria Medal of Honour) replaced the long-standing rose garden with this new, challenging, and very exciting planting concept. I was enthralled by it.

At the time I still lived in the Surrey family house with its hot, dry front garden which I bedded out differently at least twice a year. Initially I’d used traditional bedding combinations that I knew would thrive in the conditions. But after visiting Dixter I decided on the much more dramatic option of the exotic style for the summer. Trachycarpus fortunei were planted as centrepieces, and cannas, dahlias, brugmansias, begonias amongst others filled the spaces in between. The hot conditions were ideal, dry not so, and watering therefore became an important feature of summer maintenance. At the same time a new permanent bed was developed in the back garden, known as “the hot bed” with a similar palette of plants including a musa basjoo (the hardy banana) which was almost always cut to the ground each year but grew back with vigour each summer. I had fallen in love with exotic-style gardening.

Inspiration from the late Will Giles

The next important influence was the late Will Giles, with his wonderful Exotic Garden in Norwich. A long weekend away a few years ago was built around wanting to visit his garden and meet him. I had already bought his books and the warmth of his welcome was a mark of a great artist who shared his knowledge and love for plants and gardening with such enthusiasm and deep generosity. I ended up Facebook friends with him and benefited from his interest and kindness on several occasions. You can read an obituary of Will here.

On Will’s suggestion we visit an outstanding garden in Barbados a few years ago, Hunte’s Garden which gives a wonderful impression of the style and creates a unique atmosphere where operatic arias waft around the garden from hidden speakers, as you admire the plants.

What is an Exotic Garden?

There are as many different interpretations of the exotic gardening style as there are gardeners, but if there is one element which is a recurring theme it is the use of foliage (coloured and large leaved) to create a lush effect where you could (almost!) imagine yourself in some kind of jungle environment. A number of signature plants recur including musa basjoo (the hardy banana), various palms, bamboos, tree ferns, tetrapanax papyrifer rex (often called T.rex), gingers, podophyllum (spotty dotty), fatsia, with dahlias, cannas, begonias and other annuals/tender plants for colour.

In my observation there is a danger that exotic-style gardening assumes a bit of a formula, with an element of competition added too, with examples of posts on various Facebook groups of people comparing leaf sizes in rather a schoolboy fashion and the same old, same old plants being used over and over again to greater or lesser effect depending on how well they are combined and placed.

Furthermore, many proponents of the exotic gardening style use a disproportionate number of plants which are not hardy in the UK/European winter and either end up with bare patches as everything is lifted under cover for winter or (worse in my view) unsightly protection structures creating a kind of shanty town for half of the year.

We wanted a year-round Exotic Garden which included unusual plants, and several layers of planting.

Development beyond the confines of formula

A visit to the new Exotic Garden at RHS Wisley last September showed a garden that is developing far beyond the confines of any formula, and with a great year-round structure. We had initially been disappointed on our first visit, soon after it opened, but a year on it was looking magnificent. And indeed the Exotic Garden at Great Dixter continues to develop each year with new ideas for planting and Dixter’s usual pushing back of boundaries led by the irrepressible, imaginative, and untiring Fergus.

Plans for our own Exotic Garden in France

With this background, an area devoted to the exotic style was essential. Not only do we have the space, but the climate offers opportunities not available in the UK. Although winter overnight temperatures can be lower than Sussex the summer temperatures are always significantly higher. The net effect of this is that plants that wouldn’t thrive in UK winters will do so in the French garden because the prolonged summer heat somehow ripens them in such a way that they are better able to withstand the colder temperatures of deep winter.

A very good example of this is a magnificent stand of Musa basjoo that we inherited. It has never been cut down in our four winters despite temperatures during that time as low as -6C. Here’s some photographs. 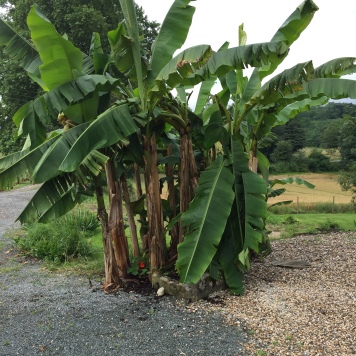 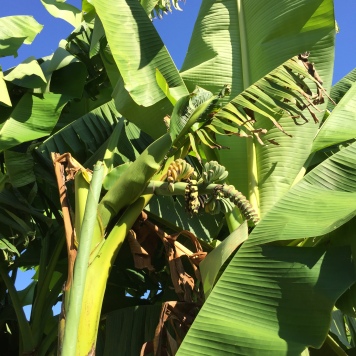 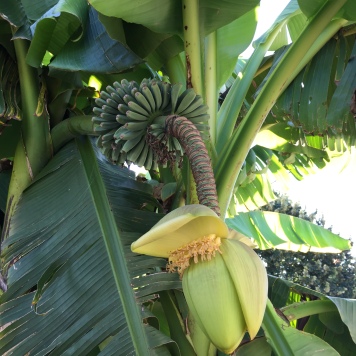 Taken in the early days, looking down the drive before the trellis fence around the sand filter had fallen down and been removed. And from inside the house:

This (below) is what the banana looks like in winter after the frost has hit it. We leave the fried leaves in place to protect the pseudostem. Some might think it looks unsightly but it rustles rather nicely and I think has a charm of its own.

Choosing and preparing the area

The existing position of the Musa Basjoo to some extent pointed to where we should create our own Exotic Garden. It is at the top of an area that used to go down to a deep dip which frequently filled with water, at least in winter. We loosely called this water the pond but it was really called a mare, and may have been a cattle drinking point, or it may simply be run-off from the sand filter of our septic tank going to the lowest point. The area is surrounded on two sides by a field (sunflowers and wheat on a two-year rotation), was covered with self-sown scrubby poplars, elders, willows, a huge pampas, nettles, and other weedy plants, and marred by a lot of rubble that had been dumped there over decades (possibly centuries). The slopes were too steep to walk down.

Our original intention was to create a proper pond in the dip and surround it with exotic style planting. But we decided against the pond because we welcome small children to the garden and reducing garden hazards seems a sensible course of action.

A large quantity of topsoil from the area which became the new car park at the beginning of 2018 was dumped into the dip, filling in “the pond” and smoothing the steepness of the slopes. I then sowed the area of bare soil with a mix of colourful annuals in spring 2018 to cover the soil and create some passing interest (for us and for pollinators!). They were absolutely gorgeous and definitely did the job!

After the annuals were frosted at the back end of the year they were cleared to compost and the ground prepared with several trailer-loads of well-rotted horse manure and then rotovation.

The steps down into the Exotic Garden

I wanted to make sure that we were enticed down into the Exotic Garden, that it became an easy destination and that we wouldn’t just stand at the top and look down at it. So Jon our gardener was enlisted to make a series of wooden steps filled with woodchip and he’s done a great job. 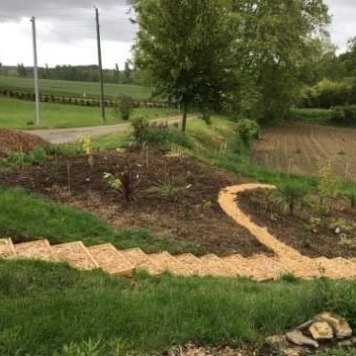 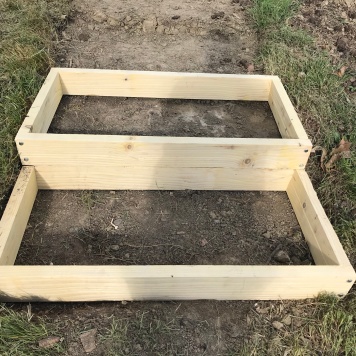 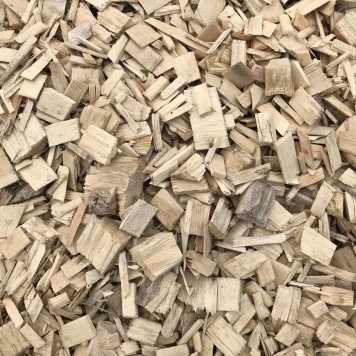 They are still looking a little bright and stark, but sunlight will fade the yellow to grey, plants will cover and soften the sides, and they will soon look very natural (which is our objective).

The Exotic Garden is quite a large area (and will indeed become larger as time goes on and we extend the planting area to both sides of the steps) and I wanted to make sure that we included a number of plants to give more structural height throughout the seasons not just in high summer. My first planting list reflected this and in due course (although probably not this summer) we will infill with many different smaller plants so that after a couple of years we achieve the real jungle effect that the exotic garden style aims for. And of course we will always have scope for adding some of the more colourful exotic flowers such as dahlias which we love.

As already mentioned, some exotic style gardens look wonderful for a short time in mid-late summer but pretty bare and stark for the rest of the year. I wanted to avoid this pitfall, hence aiming for a good structure of larger plants that will thrive year-round.

The hedge between the Exotic Garden and the farmer’s field

There is a fairly substantial area of grass below the planted area leading up to the boundary with the farmer’s field and we planted a line of interesting mixed shrubs in December 2018, a metre in from the boundary which will frame this area. In time these shrubs will grow together and merge into a kind of hedge, but very informal and loose with no straight lines anywhere. Some will grow tall enough to create a sense of enclosure and privacy, somewhere to put a bench.

I can imaging sitting in just that spot reading a good book, occasionally glancing up to be dazzled by the large leaves, intricate textures, and zinging colours of the Exotic Garden as it continues to develop, never standing still, following the footsteps and inspiration of wonderful mentors.

Here’s my initial planting list (showing the nurseries I bought from). You’ll see that I bought from several UK nurseries as well as the French online supplier Promesse de Fleurs and local French garden centres. The primary objective at this stage was to add plants that will become structural anchors and upper layers (although a few others have crept in – impulse buying always rocks!).

7 thoughts on “The Exotic Garden: inspiration, planning and planting”